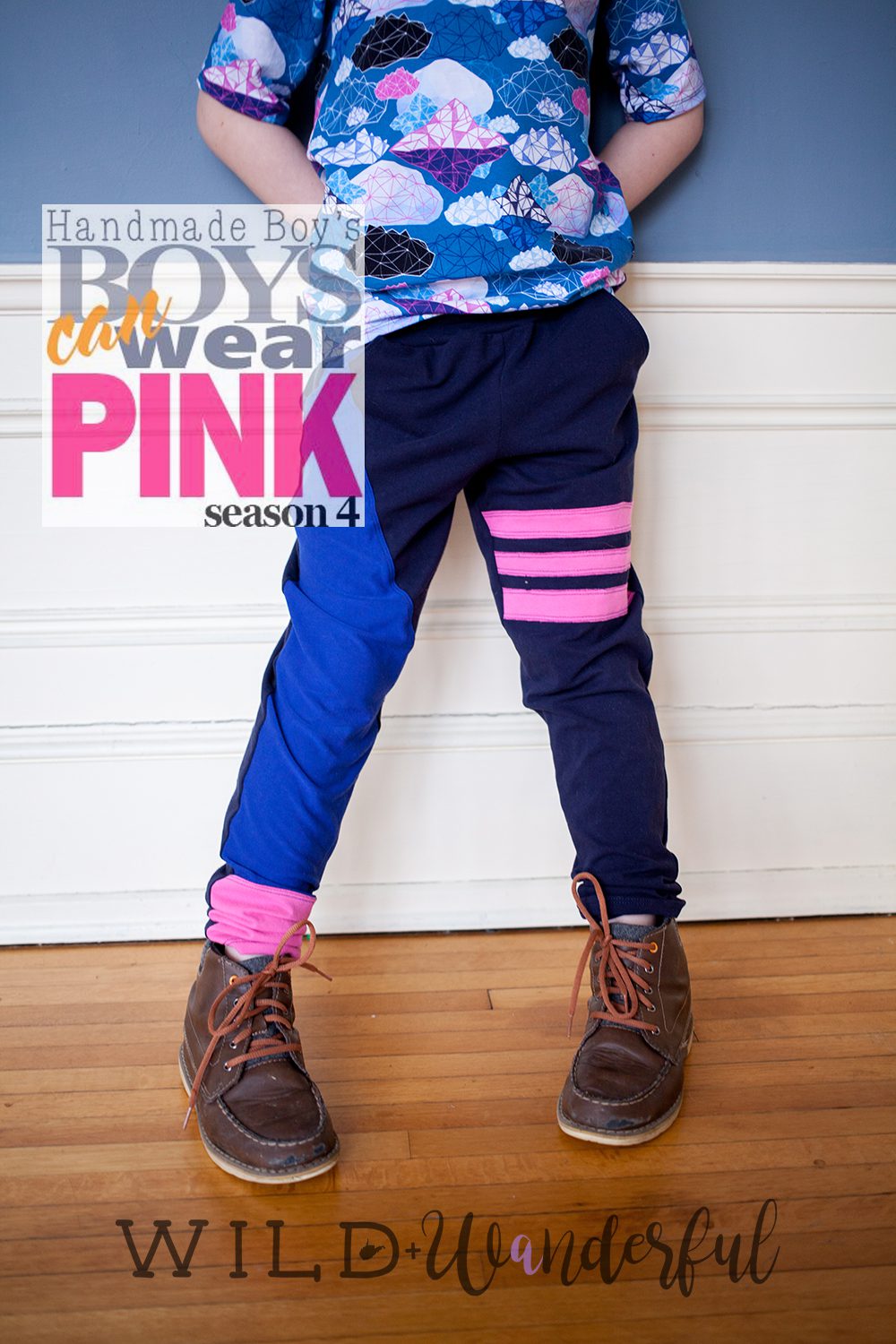 “Boys Can Wear Pink” is back and I’m so excited to be part of my favorite blog tour.  Can you believe that we are in the fourth season of celebrating boys and smashing gender stereotypes?  It seems like just yesterday that my girl Kelly put out a call and I signed up for my first ever blog tour.  The rest has been history!  I’m so honored to be touring alongside all of these talented women each year.

Here’s a quick down memory lane if you want to see the previous three years.
Also…whyyyyy does he have to change so much each year?
Season One | Season Two | Season Three

Of course, this year I wanted to change the style up again.  I’ve done a funky blazer, a bowtie, and some flannel….so this time around, I jumped back a couple of decades and decided to give Louis a little 80’s flavor.  OMG I love it on him.  It helps that Louis looks freaking adorable in everything.  But I really do love this look.  It’s fun and fresh and full of color, just like Lou.

And what do you do when your super fly child is wearing some super fly duds?  You make him extra boss in a couple of photos with some rad sunglasses.  Obvs. 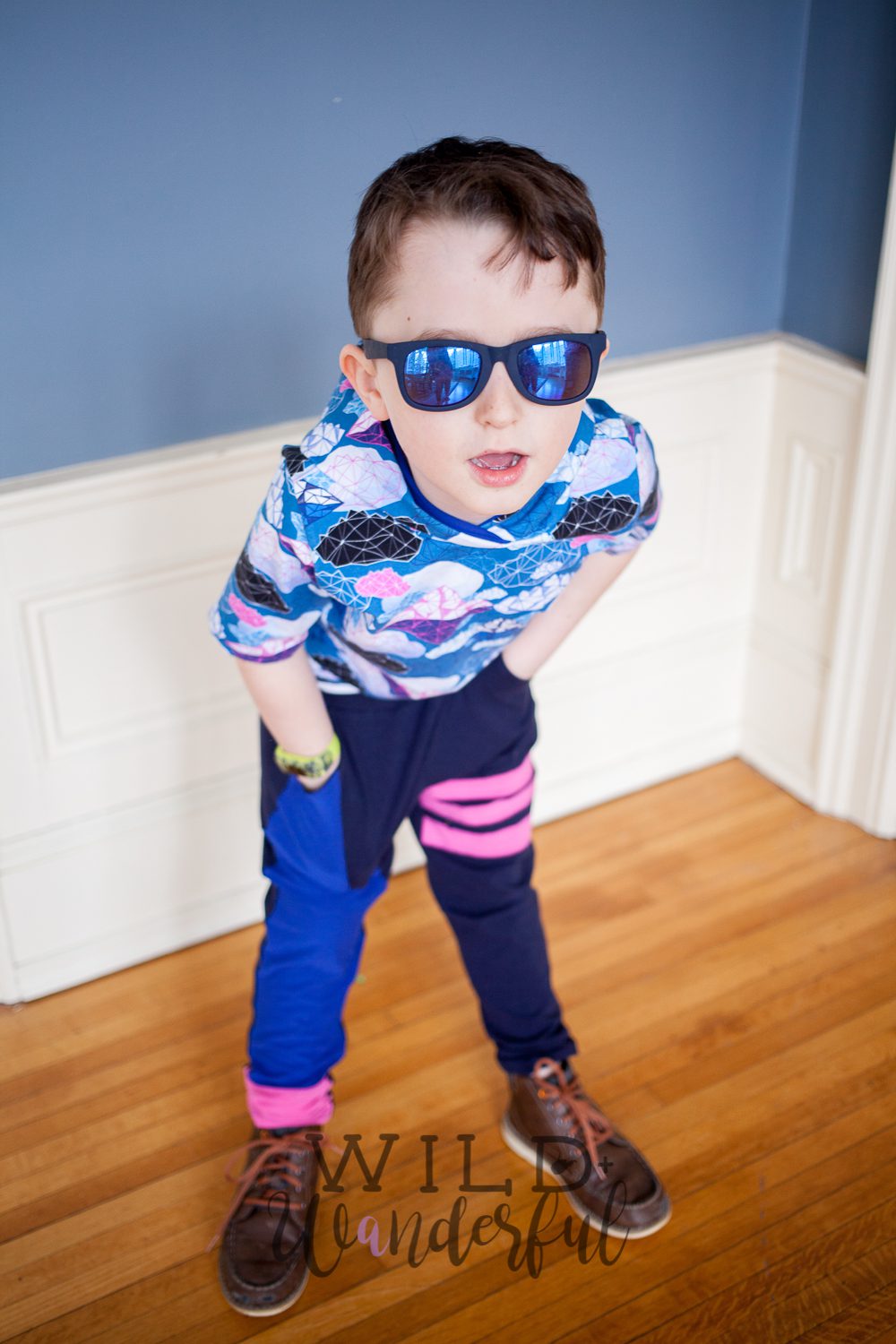 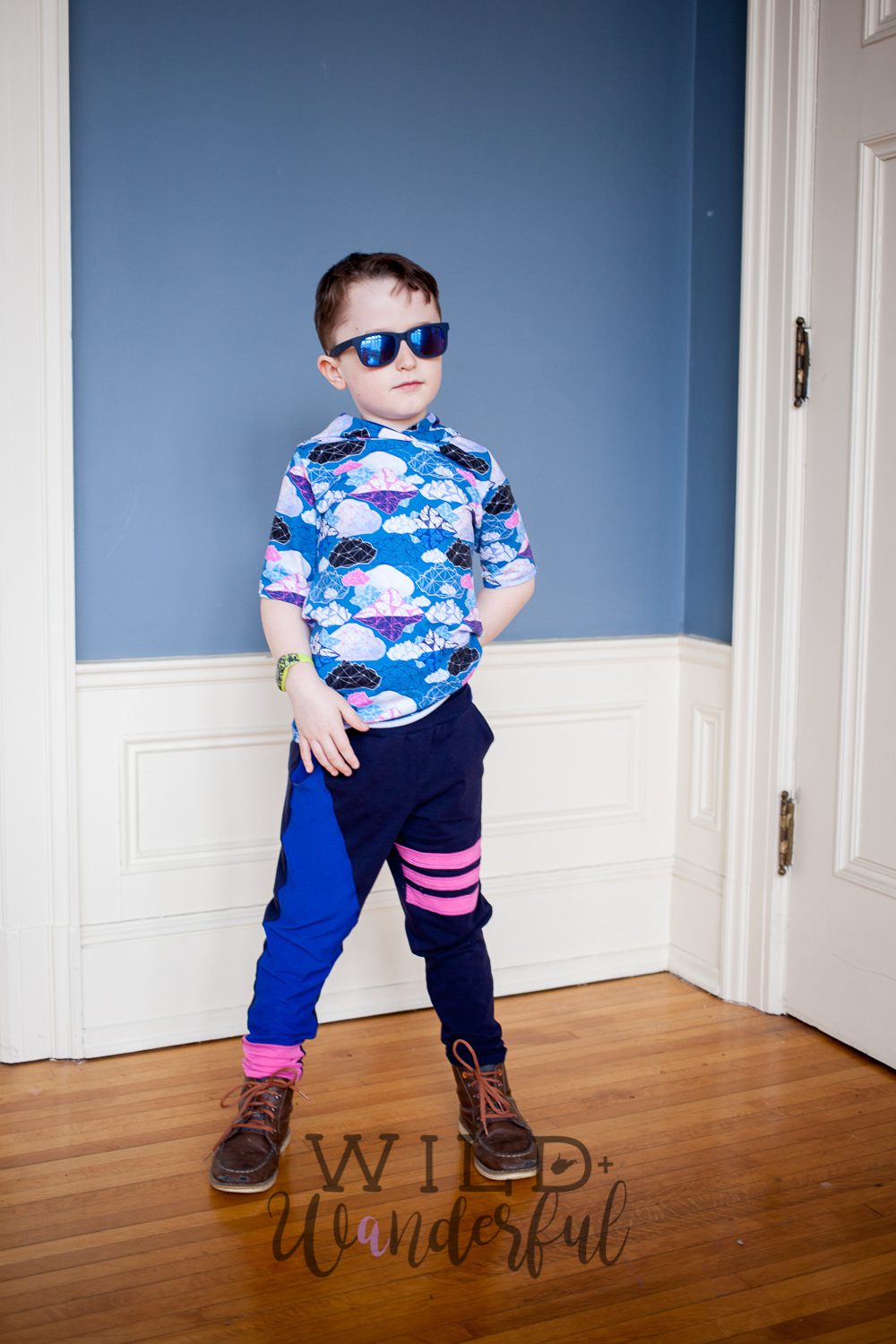 “Lou can you go stand up against this wall real quick?”
Him: Hands behind head, sunglasses up, smirk on face. 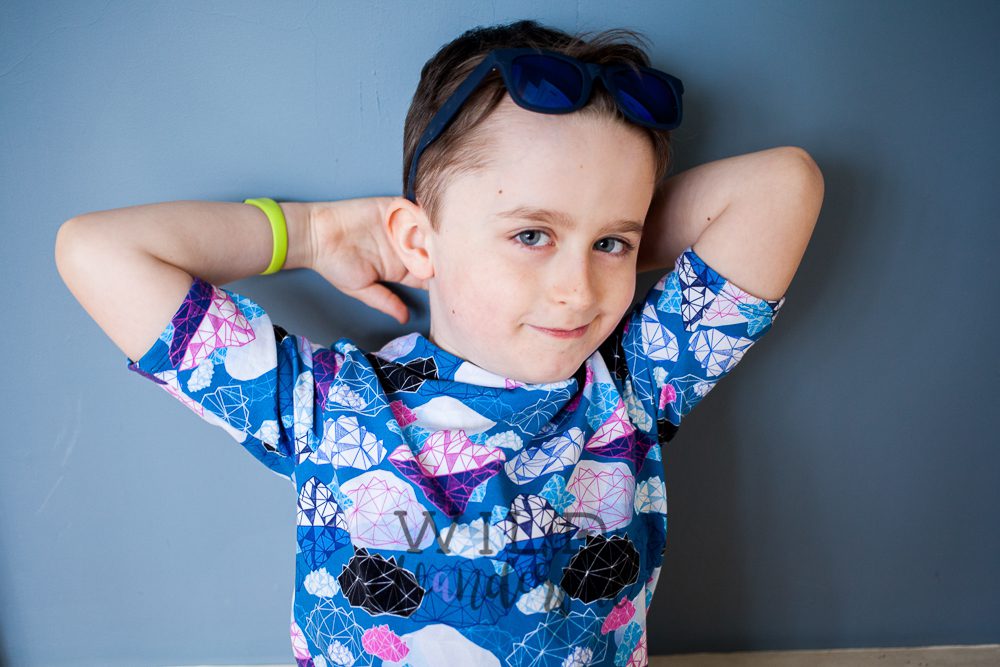 I searched high and low for the perfect fabric for this tour.  I even asked in the P4P Facebook Group if anyone knew of some good pink fabrics.  It took a while to narrow down and I learned a ton of new fabric companies that I’d never heard of before.  One of which was Sahara Fabrics — which I ultimately settled on.  And that’s only after I spent 2309482039483 years ogling all of their custom prints and trying to decide which one I wanted.  Because I wanted them all.  (There is this Erlenmeyer Flasks print that I am DEAD over.  No joke.  Momma needs it.)

Our final decision was on this “Ice and Sky” c/l blend.  It’s seriously so perfect.  Loud, bright pinks mixed in with lots of blues (Louis’ favorite color) and geometric (my favorite) cloud designs.  It’s the bomb dot com. 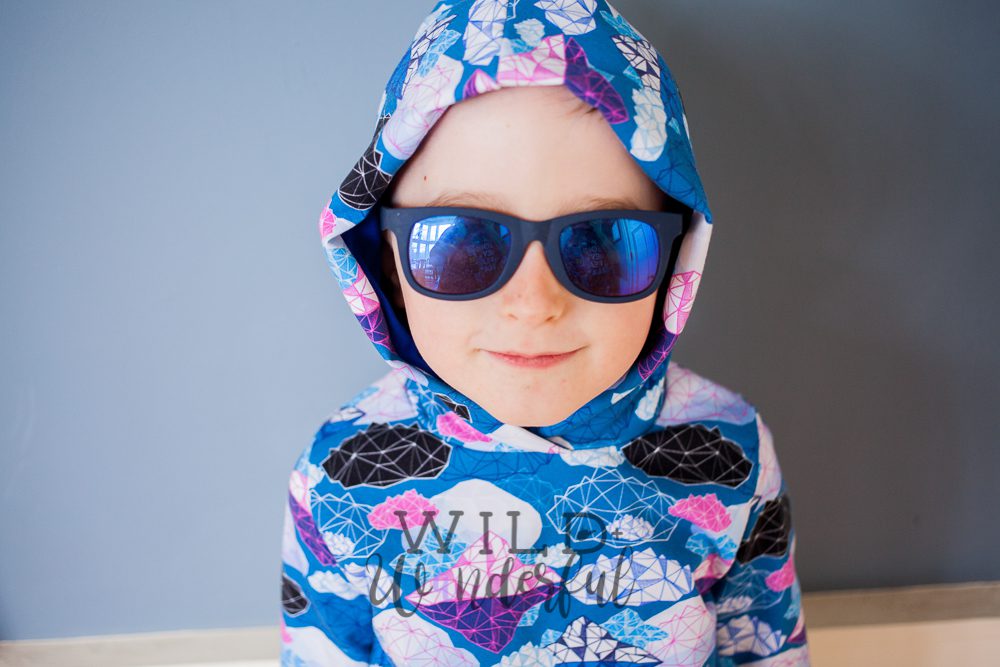 I think it’s safe to say that Louis agrees.  He also would tell you that he loves his new outfit.  Apparently kiddo is hooked on shirts with hoods, because it’s all he asks me to make anymore.  I used my trusty YoHo Henley and made the sleeves stop just above the elbow.  It’s like a transition shirt…not short sleeved, but not long either.  Half sleeves are for some reason my thing right now and I thought I’d try it out on Louis.  I actually really like it and I might make a few more spring weather shirts hit there as well. 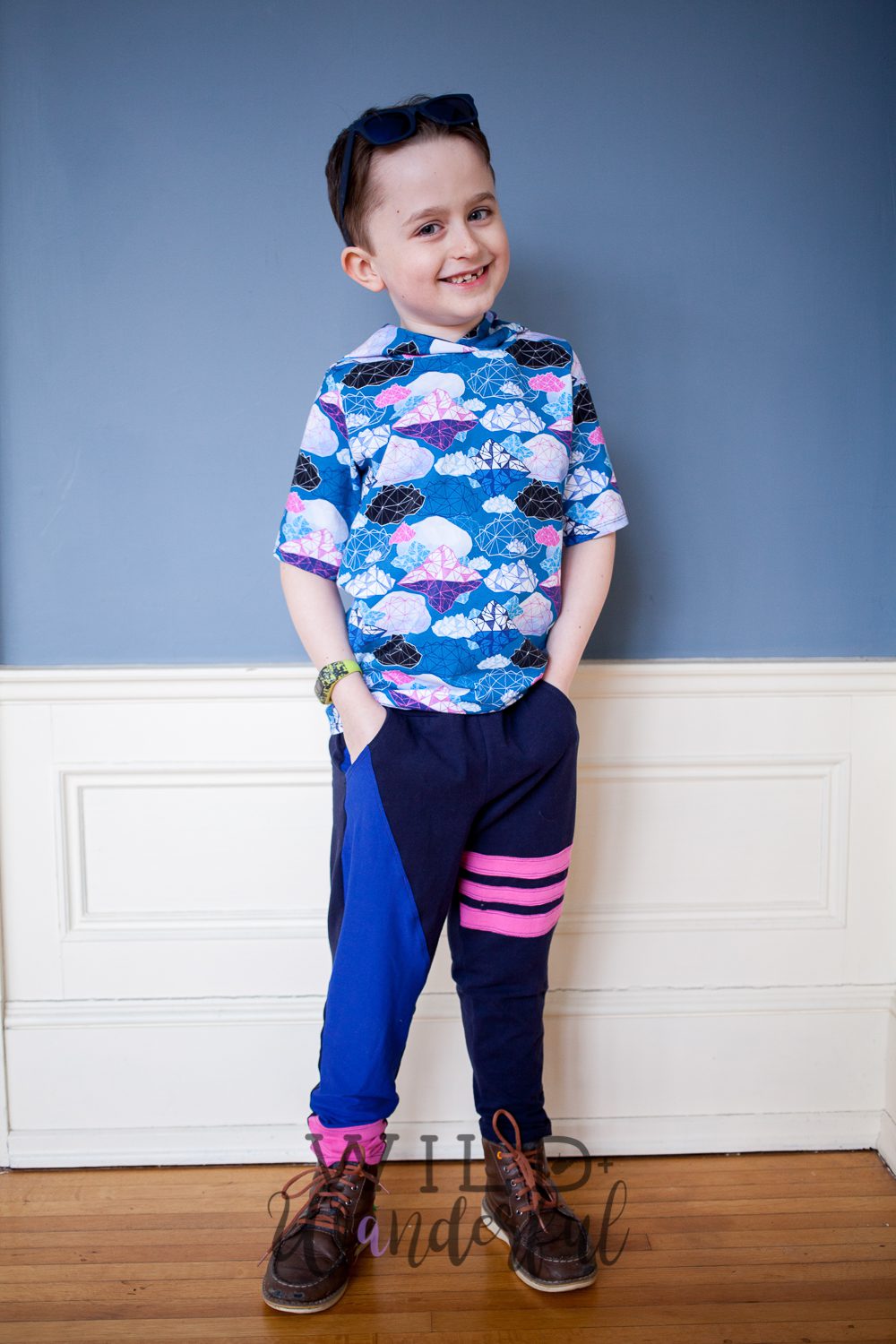 Can we talk about the pants already?  I’ve been dying to chat about them.

I wanted to colorblock some Baby Bear Joggers for him.  Because I wanted to splash pink into his bottoms but wanted to do it in a funkier way than I’ve done before.  I quick googled “color block joggers for men” and saw a few that had this super dramatic angled blocking on one of the legs.  And lucky me, I didn’t have enough length in royal to continue it down the full leg…so I just blocked the ankle in pink.  And then balanced it out a little by adding some pink stripes on his thigh.

OBSESSED, you guys.  I think these are so cool.  (I also love that Lou’s natural foot position is how my feet fall in a lot of photos I take on here.  The apple does not fall far from the tree, my friends.) 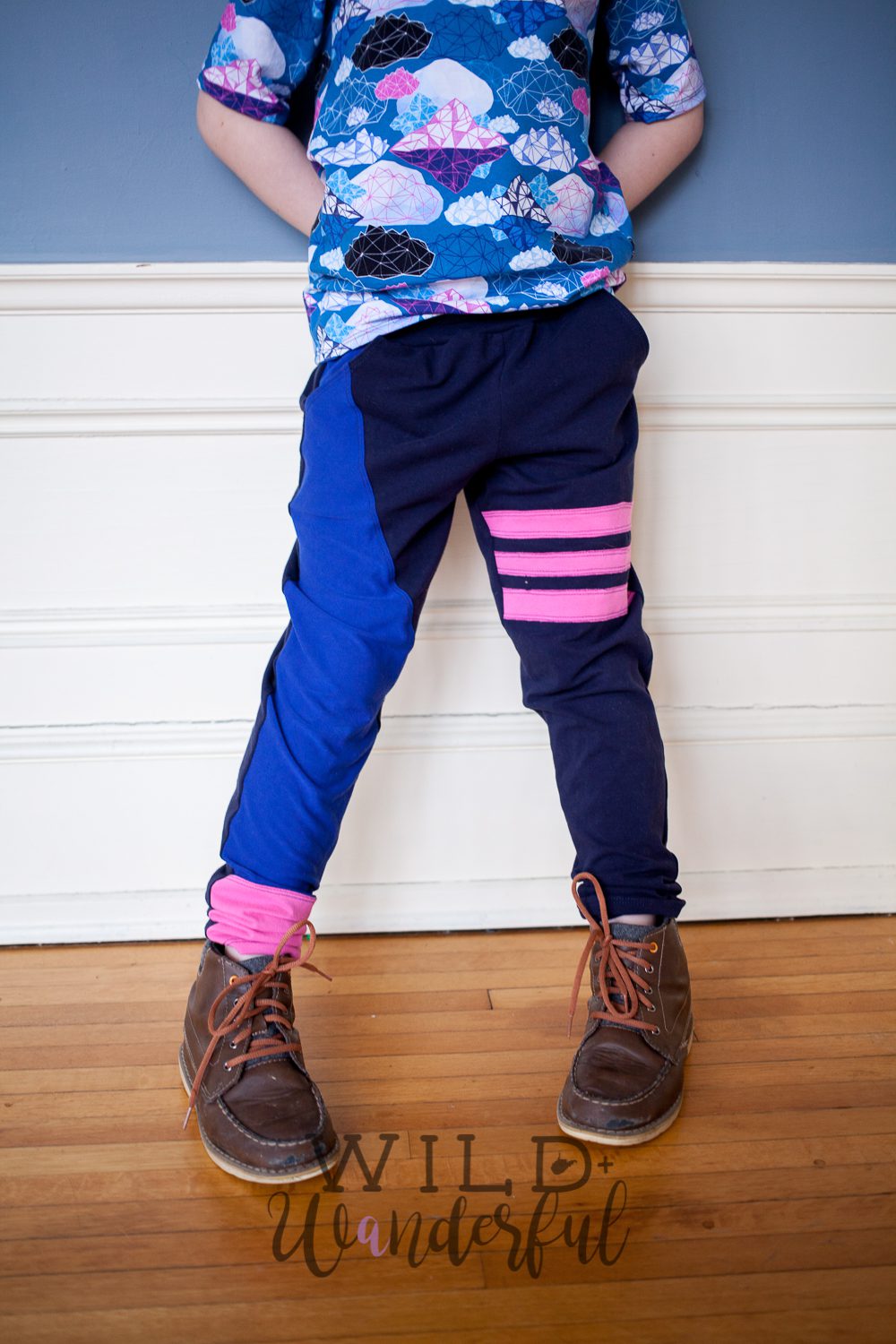 I don’t want to be a person who harps on things.  I’m sorry that I bring out my soapbox every year during this tour.  But some things need to be said, maybe just as a reminder.

Colors do not have genders.  You don’t have to be a girl to wear pink — you have to be a human person who enjoys wearing that specific shade.  It doesn’t matter.  It never has/should have.  And it certainly should not be spread to a new generation of young people.  Let’s stop with the bullcrap gender “rules” and just let people be people who likes things.

And while I’m at it, remember that boys should be allowed to be sensitive.  They are allowed to feel all the feels.

Boys should be encouraged to have dolls and stuffed animals and other things that they care for…because eventually a good majority of them will become parents and fathers that need to care for their own babies.  That is not a woman’s role, it’s a parent’s roll.  Dads are so crucial in their children’s lives.  It’s so important to create compassionate people and to not squash that in anyone. 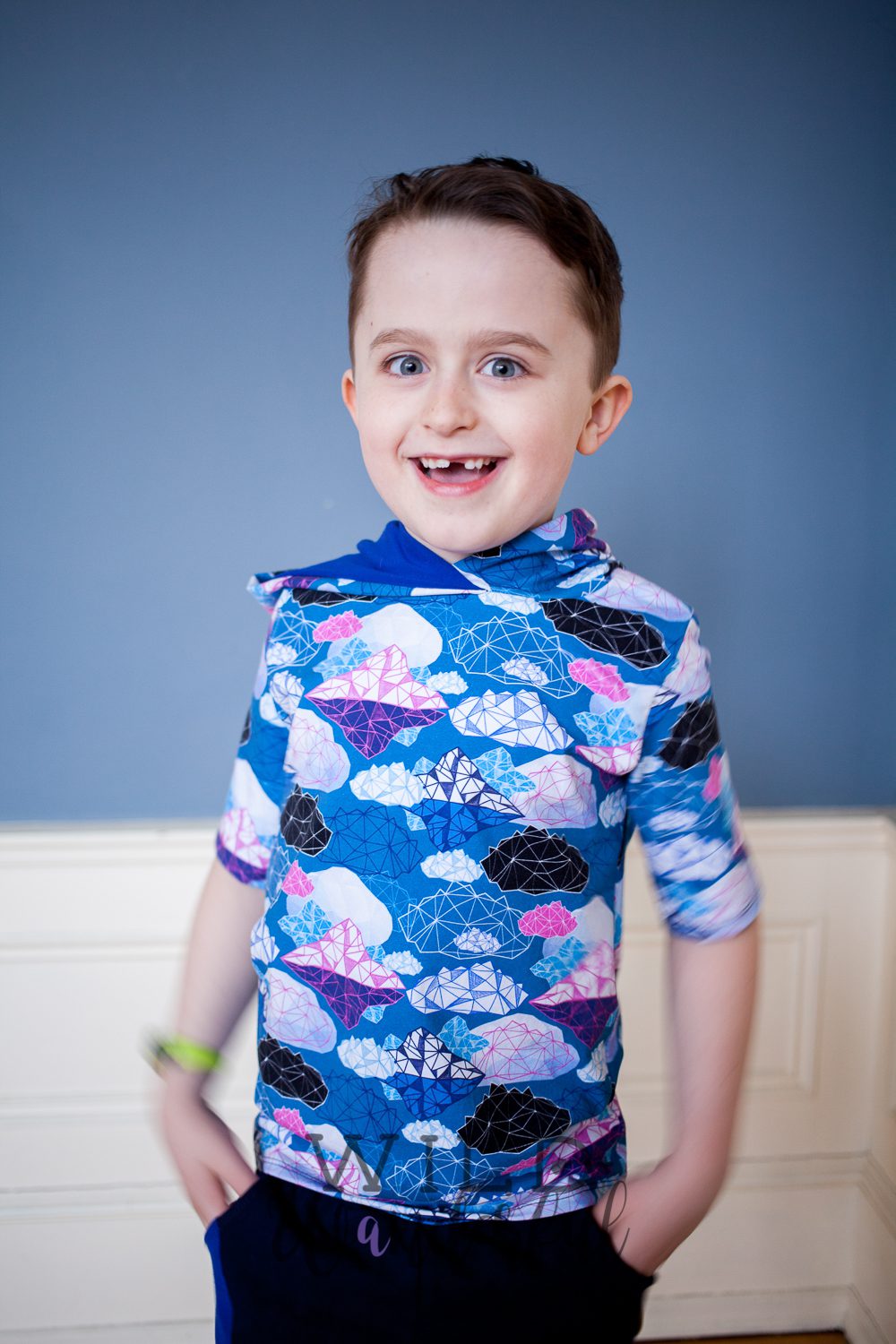 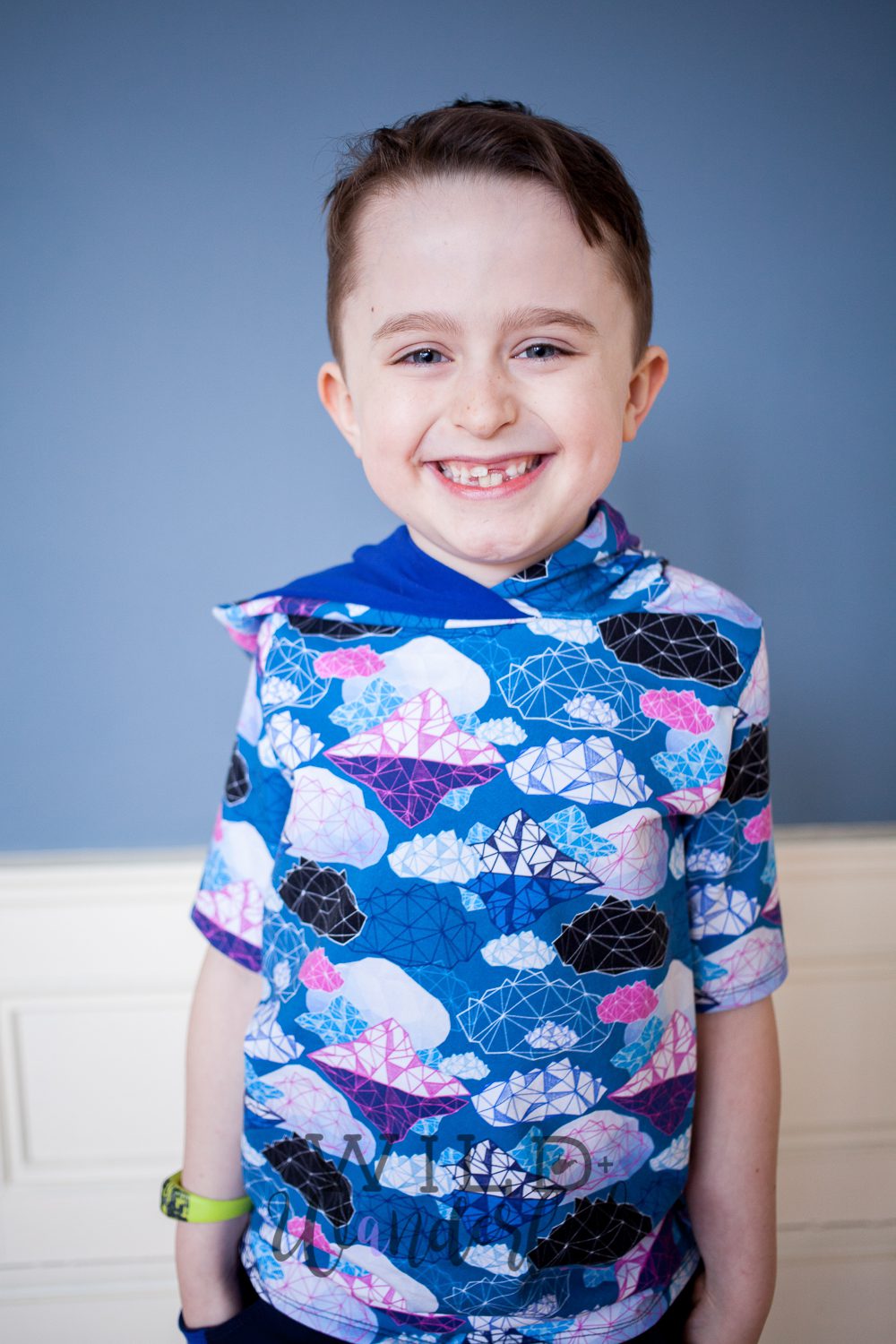 I can’t imagine taking any emotion or color or interest away from Louis because I thought it was “girly”.  He deserves better than that.  We all do.

::steps off soapbox for now:: 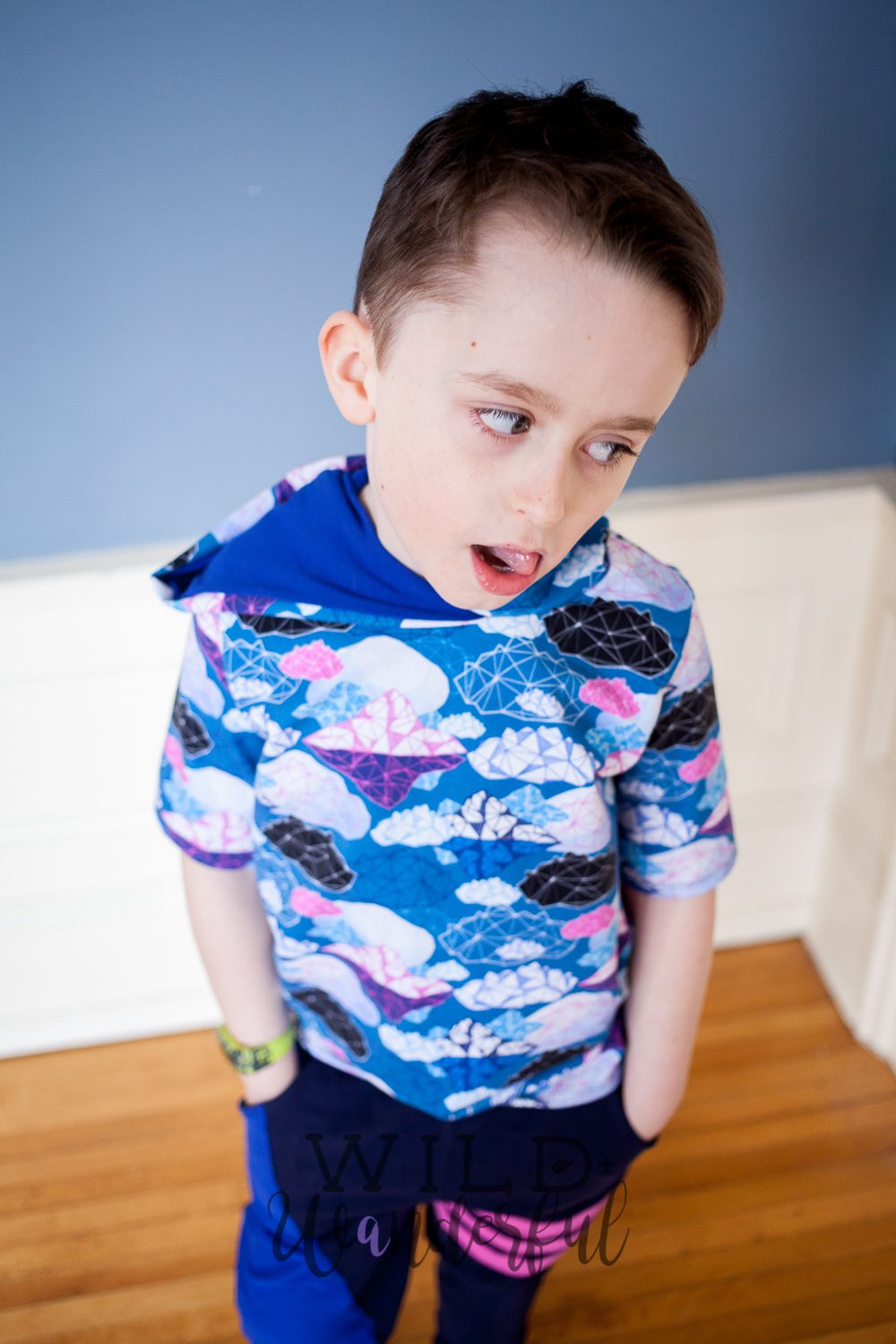 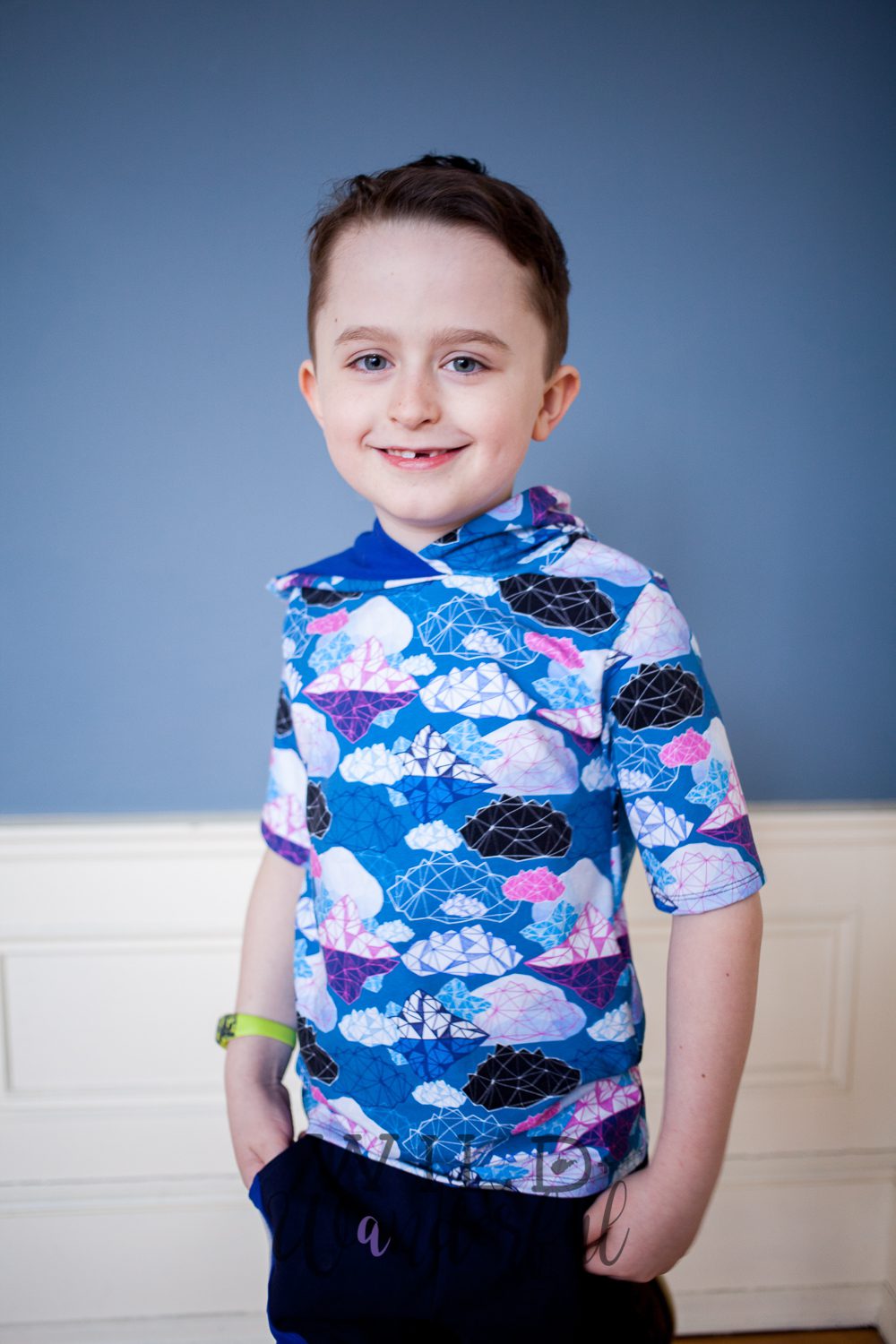 Don’t forget to check out EVERYONE on the tour this year.  The sneak peeks are killing me!  I can’t wait to read them all!  (The links don’t go live until the actual day of the tour…so if some are dead ends, that’s why.)

Fabric: Ice and Sky | Rose from Sahara Fabrics (navy + royal fabrics were from my scrap stash)