Hi!  My name is Katy and I like to make things. Making: It’s in my blood.

Growing
up, I was surrounded by Makers.  My father is an engineer,
builder-of-all-things, tech-enthusiast and photographer.  My mother is a
baker, quilter, crafter and all-around creative genius.  It was
impossible to do anything but become a mixture of those two.

Bennett
and I met while we were both college students at West Virginia
University.  We fell for each other over a game or two of beer pong…the
most college way to fall for someone.  He fell in love with my loud,
over-the-top ways. I fell in love with his sweet and hippie vibes.

We
married in a family home in June of 2009, were pregnant six months
later and welcomed our sweet little Louis in August of 2010.  Along with
our two fur-children pups, we live a semi-chaotic but incredibly
fulfilling life as a trio in Wheeling, WV.

Bennett is an amazing photographer: www.mckinleyphotos.com
But
first and foremost, he is a remarkable father.  His number one job
title is “Stay At Home Dad” and he rocks the crap out of it.  I’m kind
of the luckiest gal in the universe. 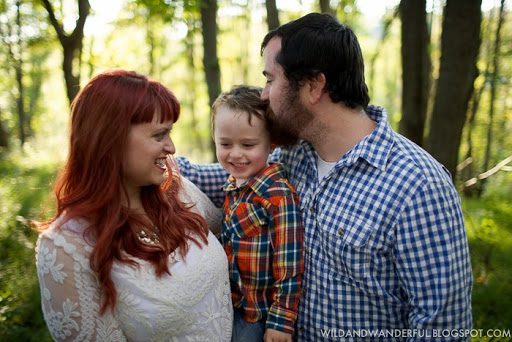 I
grew up in Hersey, Michigan…which is he teeniest, tiniest town in the
northern part of the state.  While the Mitten still holds a very
special place in my heart, I never quite had the love affair with
Michigan like I do with the Mountain State.

There is this
remarkable sense of state pride that I’ve never experienced anywhere
else.  West Virginians love West Virginia.  It’s that simple.  Once
you’ve been here and become a part of it, it never leaves you.  I was a
Mountaineer the second I set foot on this beautiful land and I’m darn
proud of it.

I giant puffy heart West Virginia.  I just hope she loves me back.

In
August 2014, I left my full-time administrative position and became my
own boss.  Well, I was always my own boss with Handmade Escapade but now this was the only thing that would feed and clothe my family.  It was terrifying and liberating and I’m still trying to find
my footing on a daily basis.  But it was the best decision I’ve ever
made.

My
business is a labor of love.  Everything I sell is 100% my own. I eat,
sleep and live Handmade Escapade and I hope that my passion comes
through with each piece I make.  I
work from a home-based studio, from which I design and print each and
every shirt myself.  No outside resources are used. I say handmade and I
mean it. 🙂