Today is a very special day, because a very special milestone was just hit…and it’s worth taking a walk down memory lane, as part of the celebration.

You’ve seen the name Patterns for Pirates jump onto this blog enough times by now that you should be pretty aware that I’ve got a connection with that business.  Not only do I do some contract work for Judy, the owner, but I also am part of her admin team, her brain trust, and consider her to be one of my close friends.  (It’s cool if you don’t want to admit publicly that we are friends Judy, haha.  But I’m going to declare my love for you on here so deal with it.) 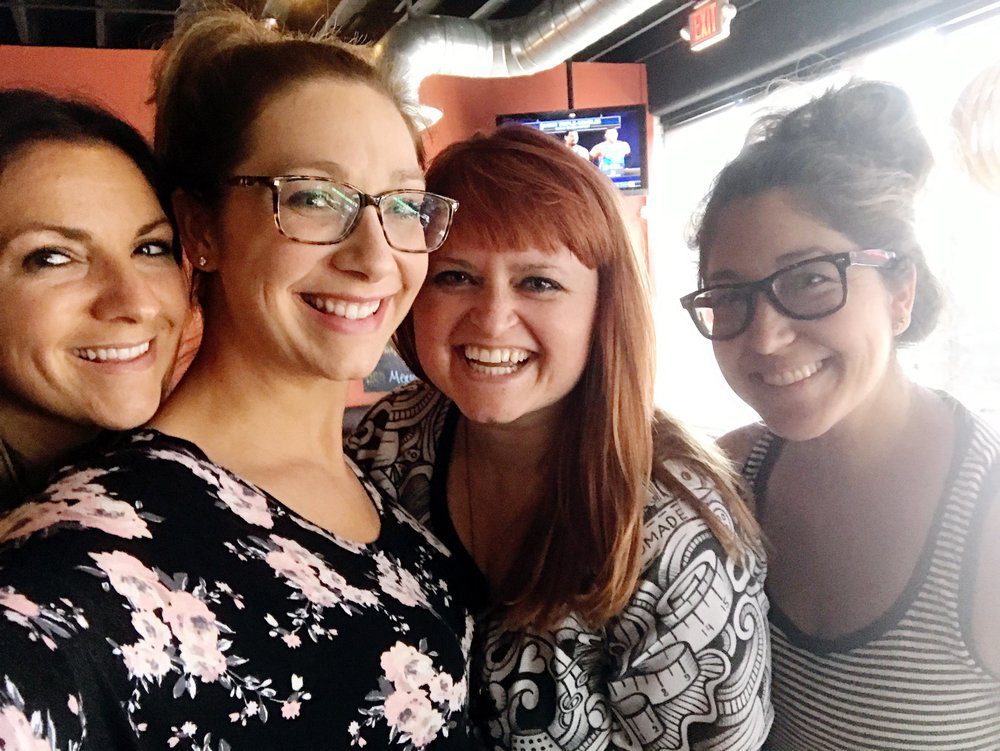 Sure, we’ve only met “in real life” one time.  But we’ve been working together, nearly every day, for so long now that she’s like a bff in my mind!  Left to Right in the photo above is Megan G. (owner/designer at Made for Mermaids and Judy’s sister), Judy (the lady herself!), Me, and Nicole L (the other Pirate First Mate along with me!)

Why is today so special?  Well….we just let our 100,000th person into the Facebook group.  ONE HUNDRED THOUSAND PEOPLE.  That’s insanity! 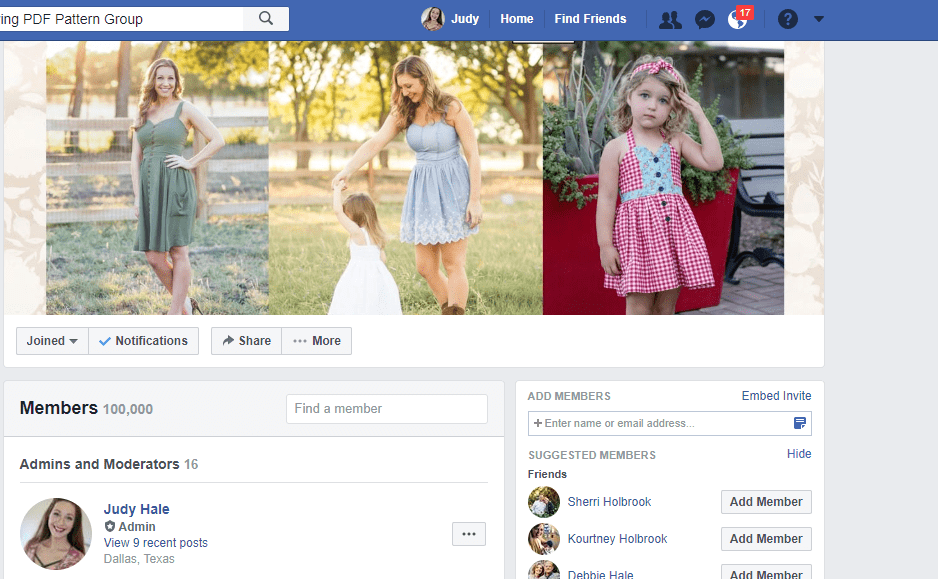 The volume of that number might not mean the same to you as it does to me.  But it’s been one hell of a journey and being in-part responsible for caring for those group members and Judy’s brand/empire that she’s built has been a huge impact on my life.

I joined the P4P group back in October 2014 and literally had no idea why I was joining a Facebook group for a pattern company.  It was the third ever pdf sewing pattern I’d ever tried, and I think I found the group because I was googling sewing patterns, found there was a package of sewing patterns for little boys, and the first one I decided to try was the one by P4P.   A year and ten days later, I was asked to join the administrative team.  The rest is history. 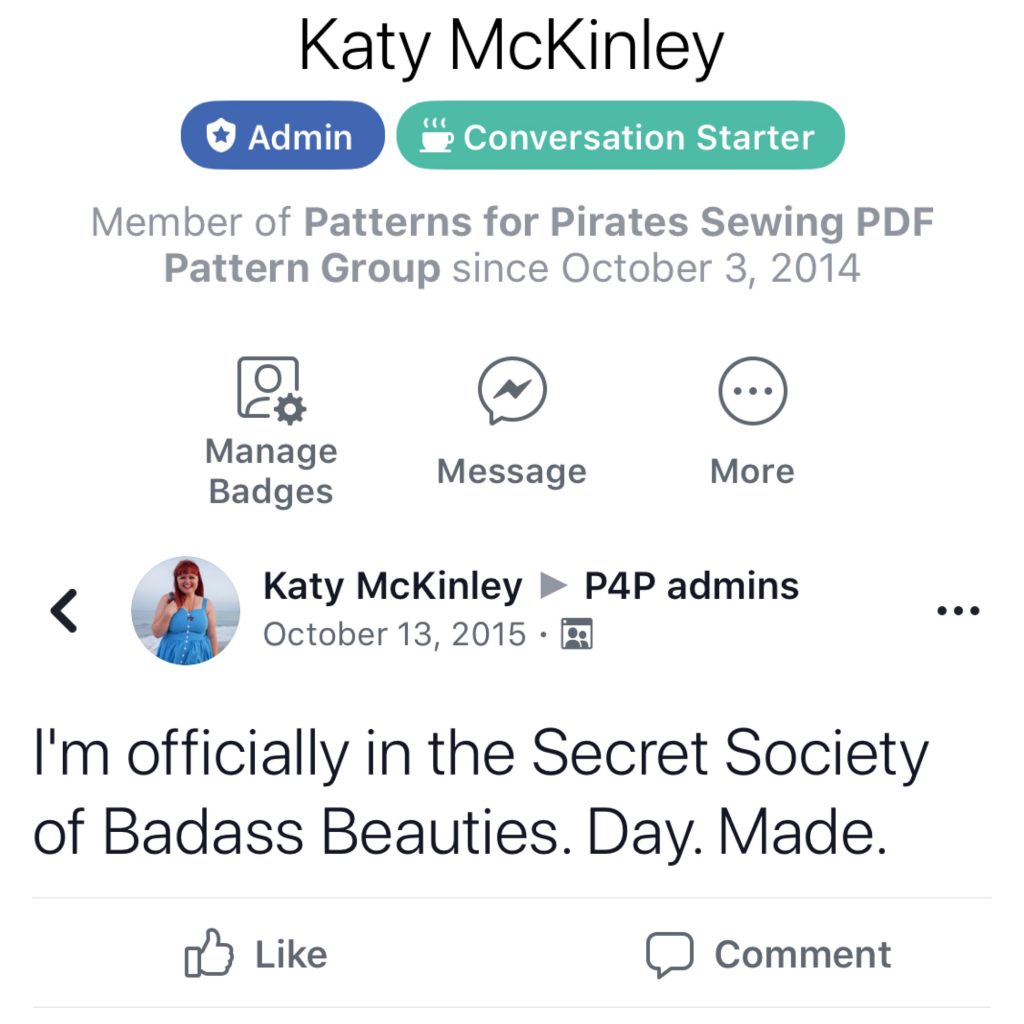 I remember my first P4P sew like it was yesterday.  Because I was SO PROUD of what I’d made.  I’m not sure why I thought tackling one of the harder patterns out there was a good idea, but I really wanted to make Louis something he would wear often.  So I sewed up this Lumberjack Jacket and took Louis’ first modeling photos.  It’s no wonder I never stopped sewing for the kiddo.  He’s always loved what I’ve made for him AND models like a natural.  The best ever.

After sewing for Lou, I started checking out Judy’s Etsy store.  And ended up buying the Women’s Raglan for myself — which is now called the Relaxed Raglan.  I did a crap job on the neckband but I didn’t care for a second.  It was my first round of pattern mixing.  SOLD FOREVER on sewing for myself.

My other “firsts” milestone in sewing for P4P was the first time I got selected as a tester.  OHMYGODDDDD I was so excited to test.  Nevermind the fact that I didn’t even see myself wearing wide legged palazzo pants ever.  I signed up because I thought if I could get my foot in the door, it would be my gateway into more sewing experiences.  Boy was it ever, haha! 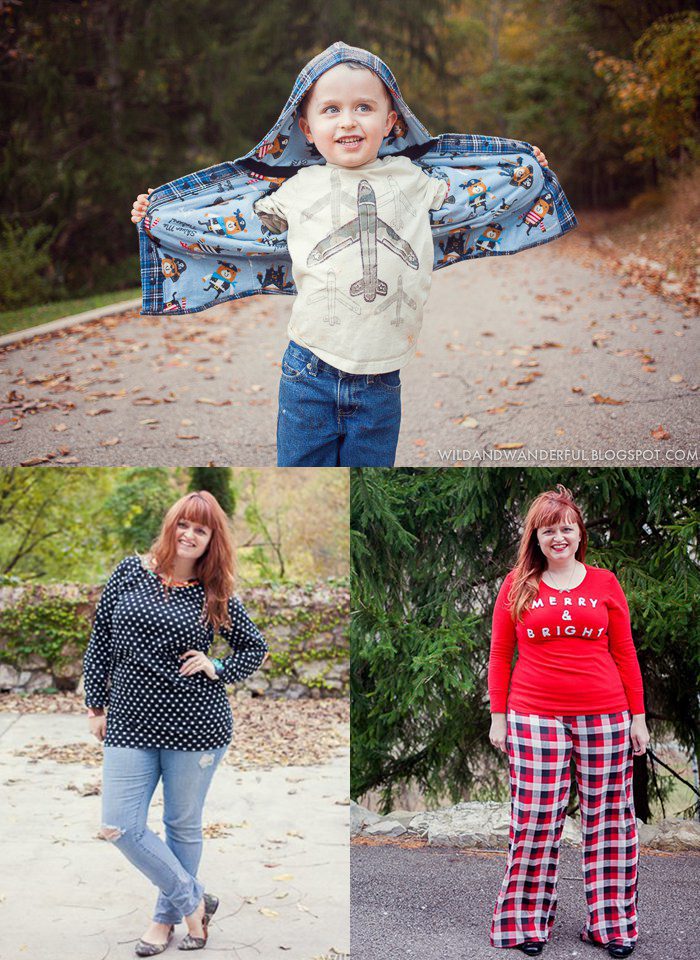 After that, you guys.  I have sewn HUNDREDS of things using Patterns for Pirates patterns as my jumping off point.  Our little trio has been clothed by me-made clothing for the last four years and the credit goes greatly to Judy and her awesome patterns that seem to fit my body perfectly.  Even when I’m like “I’d never wear that”, I end up loving it.  Here’s a quick glance at the things I’ve managed to even blog…. 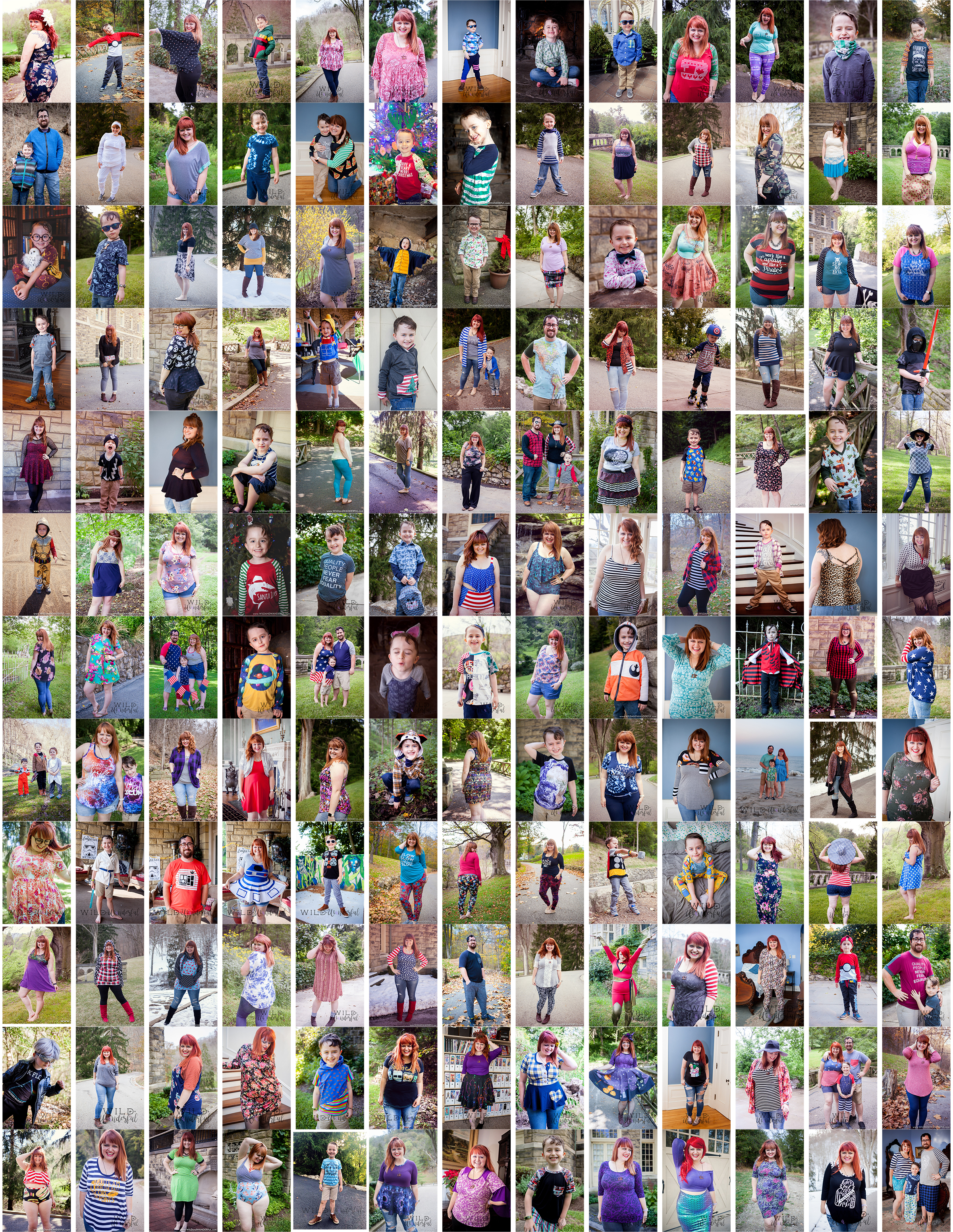 One of my favorite “what in the world is happening” experiences was when Judy selected my photo as the cover image for the Peg Legs sewing pattern, that she released as a freebie back when the group hit 5K.  FIVE THOUSAND.  I can’t even believe that I was around when the group was still so teeny.  I got to be part of the relaunch of the Peg Legs pattern, back when we celebrated 50K and am currently gracing the cover of that favorite pattern.

It’s so crazy to realize that my face has been downloaded as many times as it has.  I still take a second to realize that’s why I’m seeing someone I don’t know posting a picture of me. 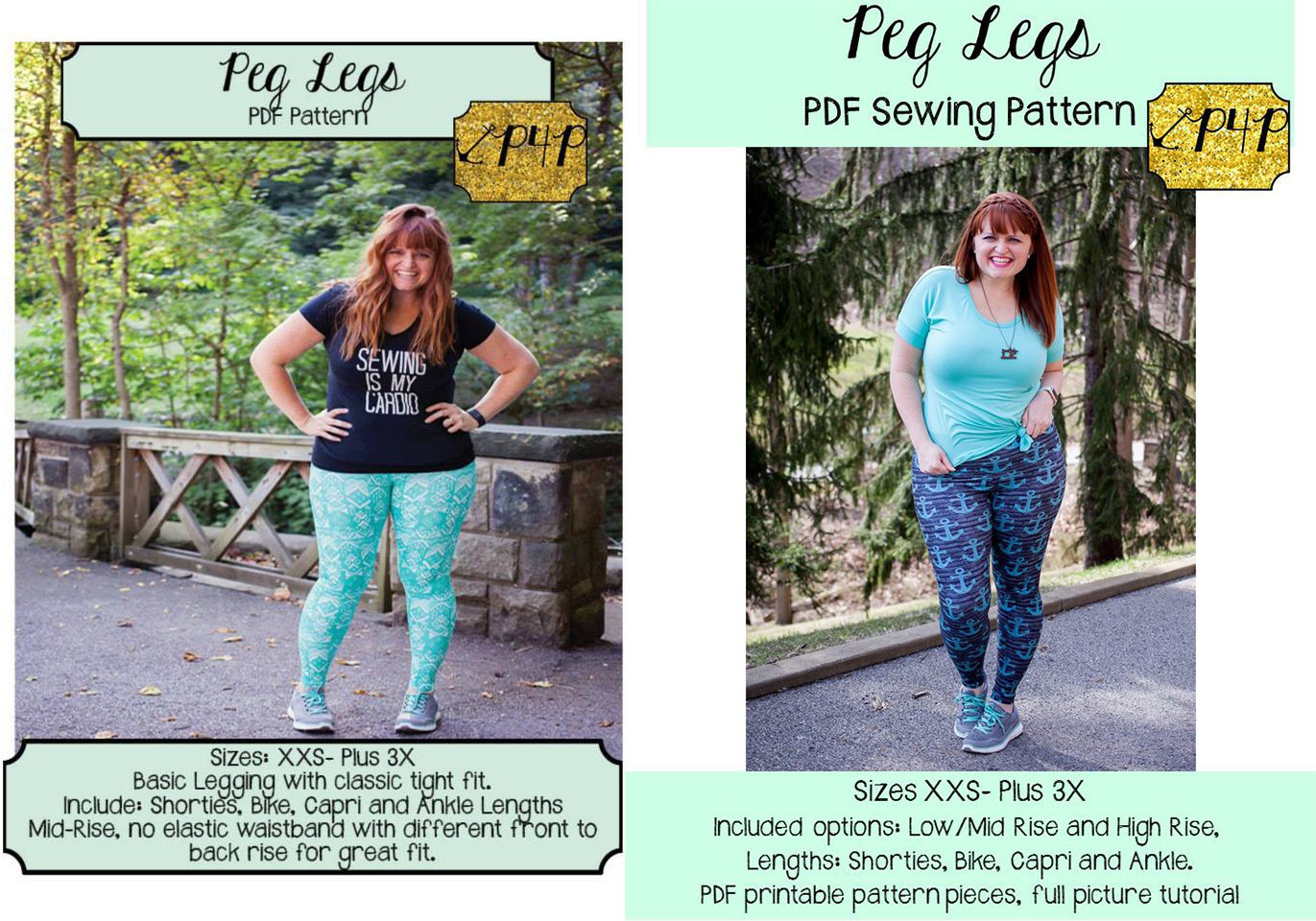 Under the amazing guidance of Judy, I’ve also been able to take ideas that I’ve had in my head and turn them into sewing patterns that she’s released through P4P.  Sure, they’re usually just smaller sewing projects.  But even with the baby drafting jobs, there’s still a lot to them!  She got me over the fear of using Adobe Illustrator (thank god because that program is my life now) and has let me stretch my wings a little bit.  Case in point: the Set Sail Hat.  I approached her with the idea and she let me take it on.  As much frustration that came with having to use Pi to figure out head circumferences a million times over, I’m so proud of it.  It wouldn’t have been possible without my fearless leader! 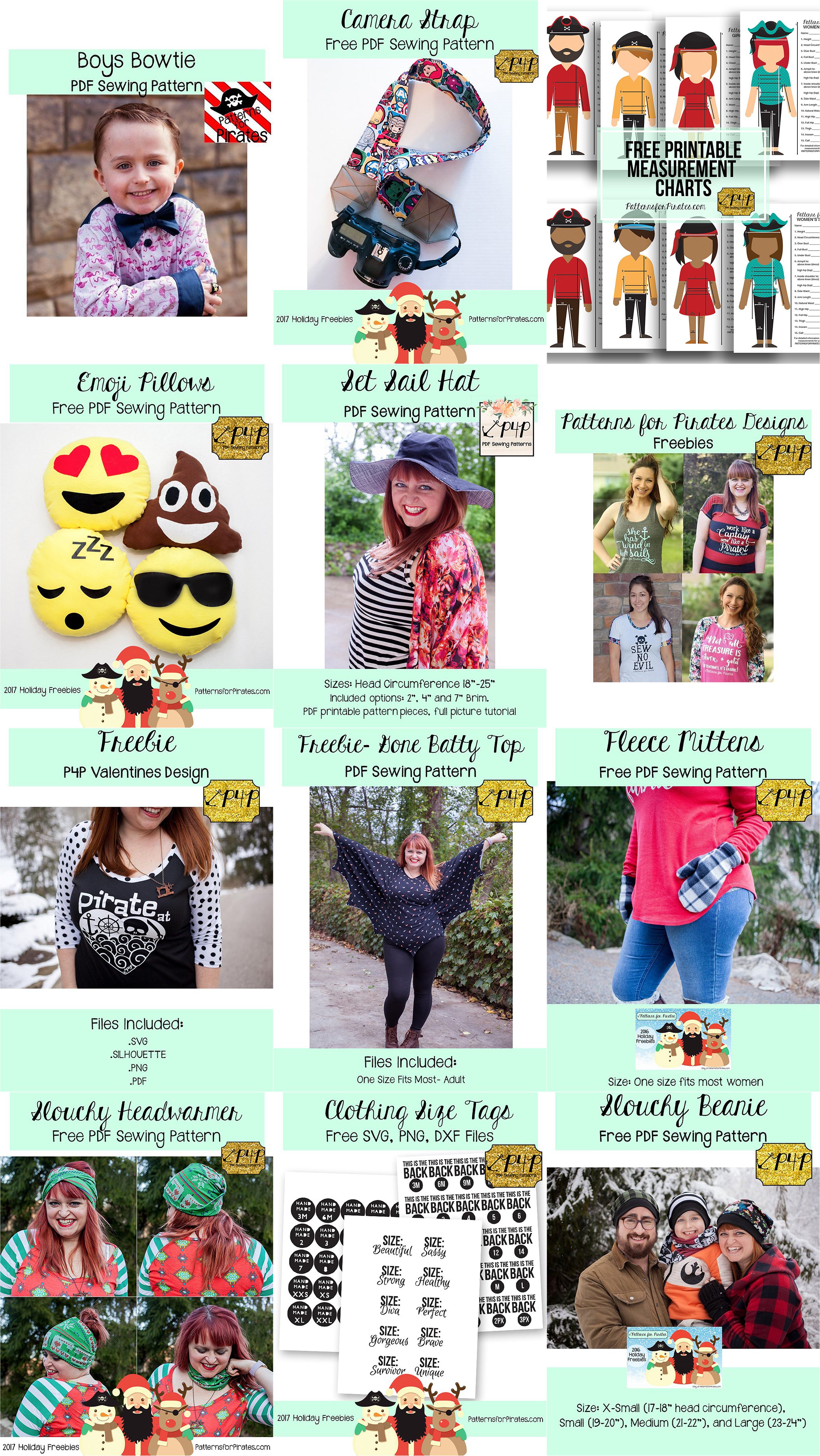 Of course, here’s a shoutout to the entire admin team.  These women are all sorts of supportive and fun and I’m proud to be part of this team.  Beyond words proud.  And honored.  And I feel like I need to pinch myself most days because I work alongside these hotties.

If you haven’t already, be sure to  join us all week for the celebrating fun!  We’ve got a sale and (shhhhhhh) a bunch of freebies coming your way!  THE BEST EVER!! 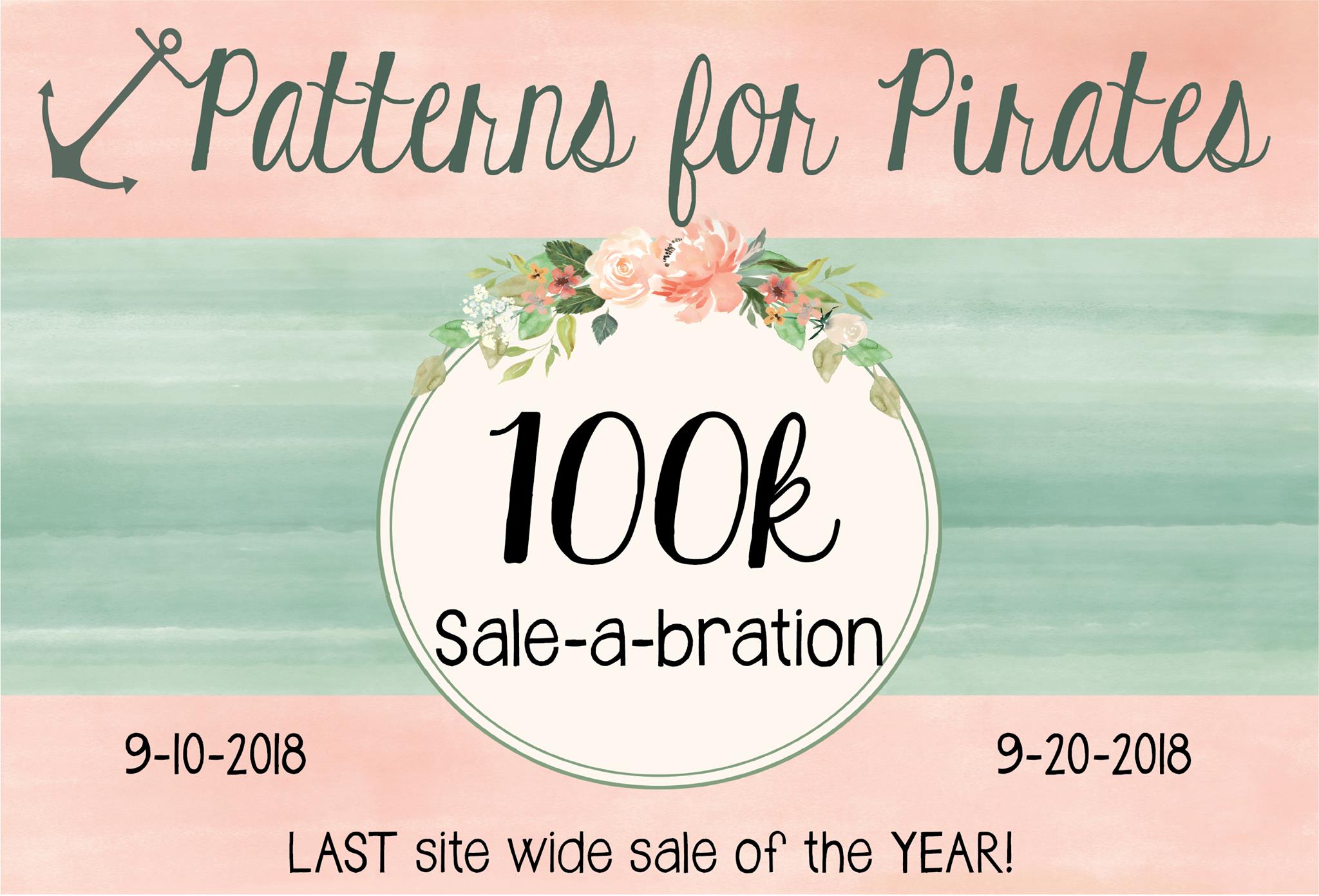 So there it is.  My four-plus year journey of pdf pattern sewing.  It’s been SO MUCH fun and I cannot wait to see where Judy takes us these next four years!  Happy 100K, my friend.  You are AMAZINGGGGGGGGG!