Oh my goodness.  I am so excited to share with you the costume that we chose, created, and executed for Louis this year.

Louis is a kid who makes a decision and sticks with it.  No matter if you try and talk him out of it or not.  He chooses his Halloween costumes and birthday party themes at least a year in advance, without budging on the idea once he’s declared it.  He will randomly state “x thing” is my favorite thing and suddenly it’s his favorite forever and ever until the day he dies.  (For example: the color blue, foxes, etc.)

Somewhere around a year ago, he became super interested in learning about the person he was named after: Louis Bennett Jr.  And soon after, he decided that he wanted to be his Great, Great, Great Uncle for Halloween.  So. Awesome. 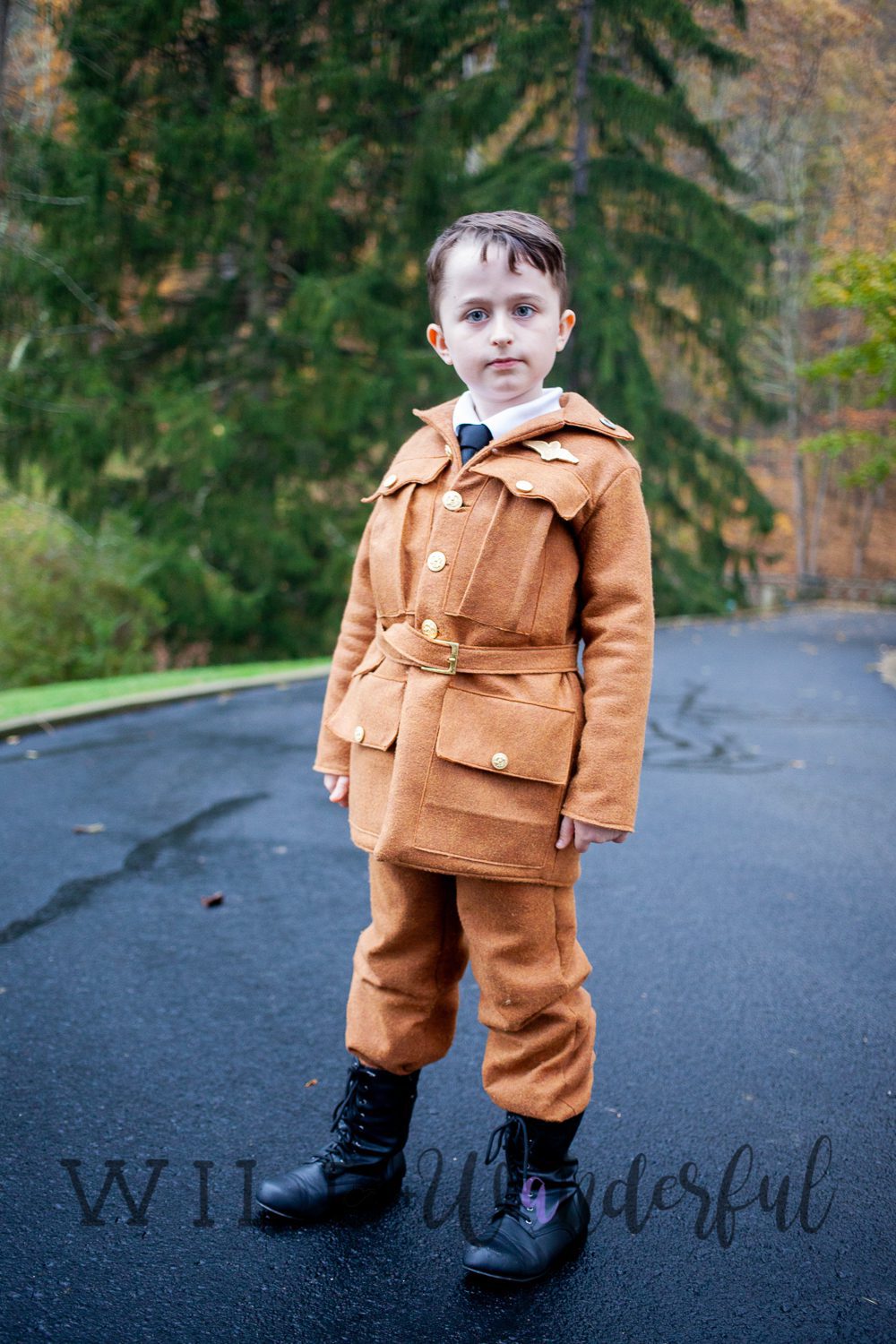 Louis Bennett Jr. flew in the the Royal Air Force in World War I, before the US had even joined the fight.  He was smart, ambitious, brave and one hell of a pilot.  And his story has remained a family legacy since his passing 100 years ago this past August.  There is a lot of information on the web already about Louis Bennett Jr.’s life (and death) — here’s one that gives a decent overview: A Mother’s Solace

Fun Fact: Louis’ due date was originally August 24, which coincidentally happens to be the date of Louis Bennett Jr.’s death in 1918.  He ended up arriving a few days before that, but a funny coincidence nonetheless. 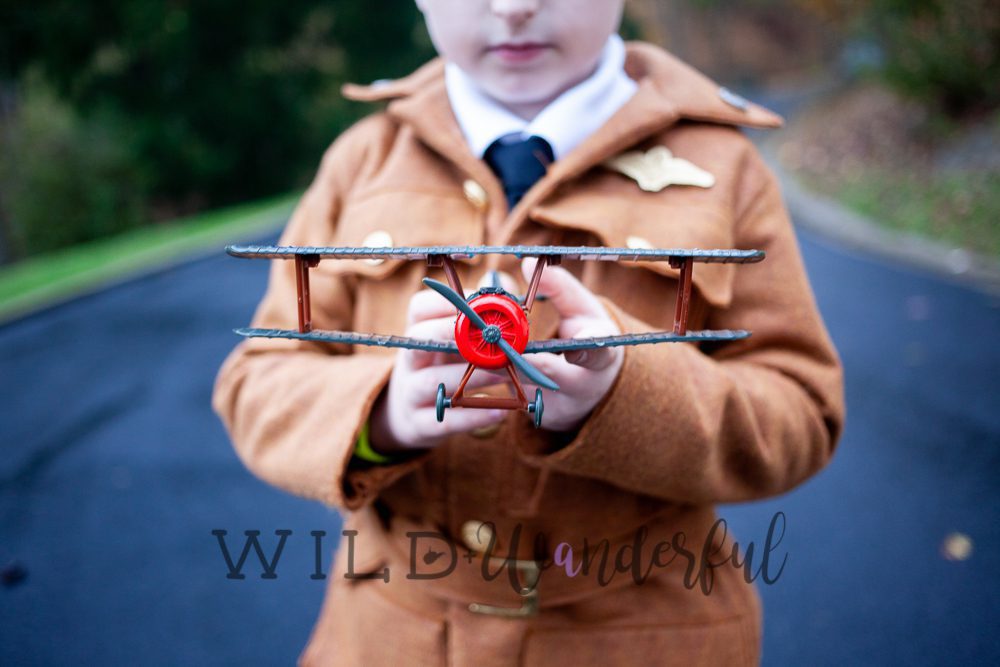 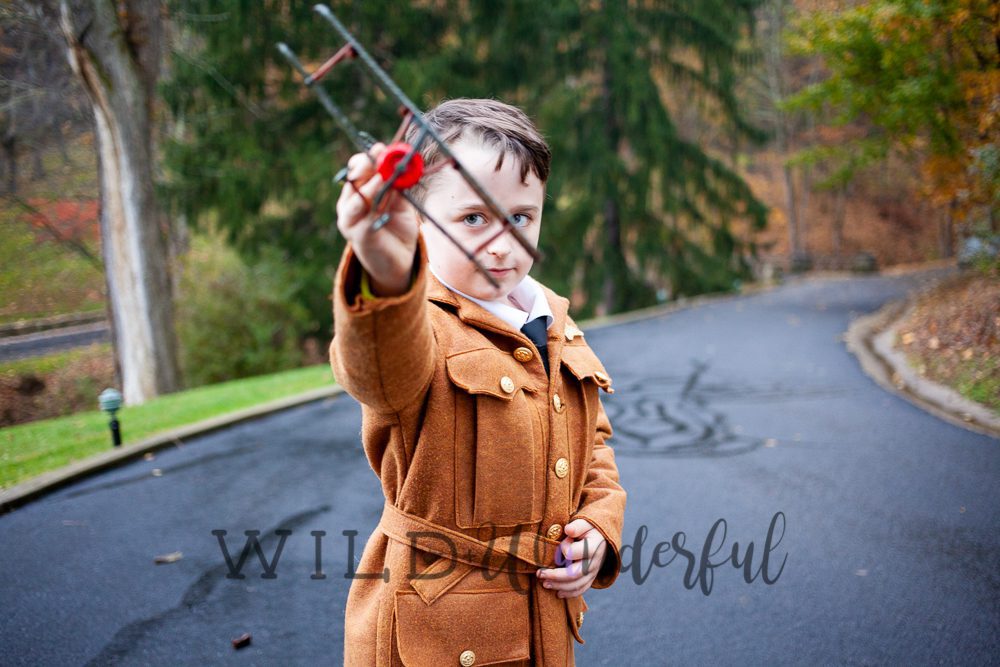 I love that Bennett helped with the details of Lou’s costume.  He cut and engraved some wooden Royal Air Force replica pins, and made sure to order in a plane for Louis to carry.  It’s not exactly the plane that Louis Bennett Jr. flew, but it was close enough.  And that’s what counts, right? 🙂 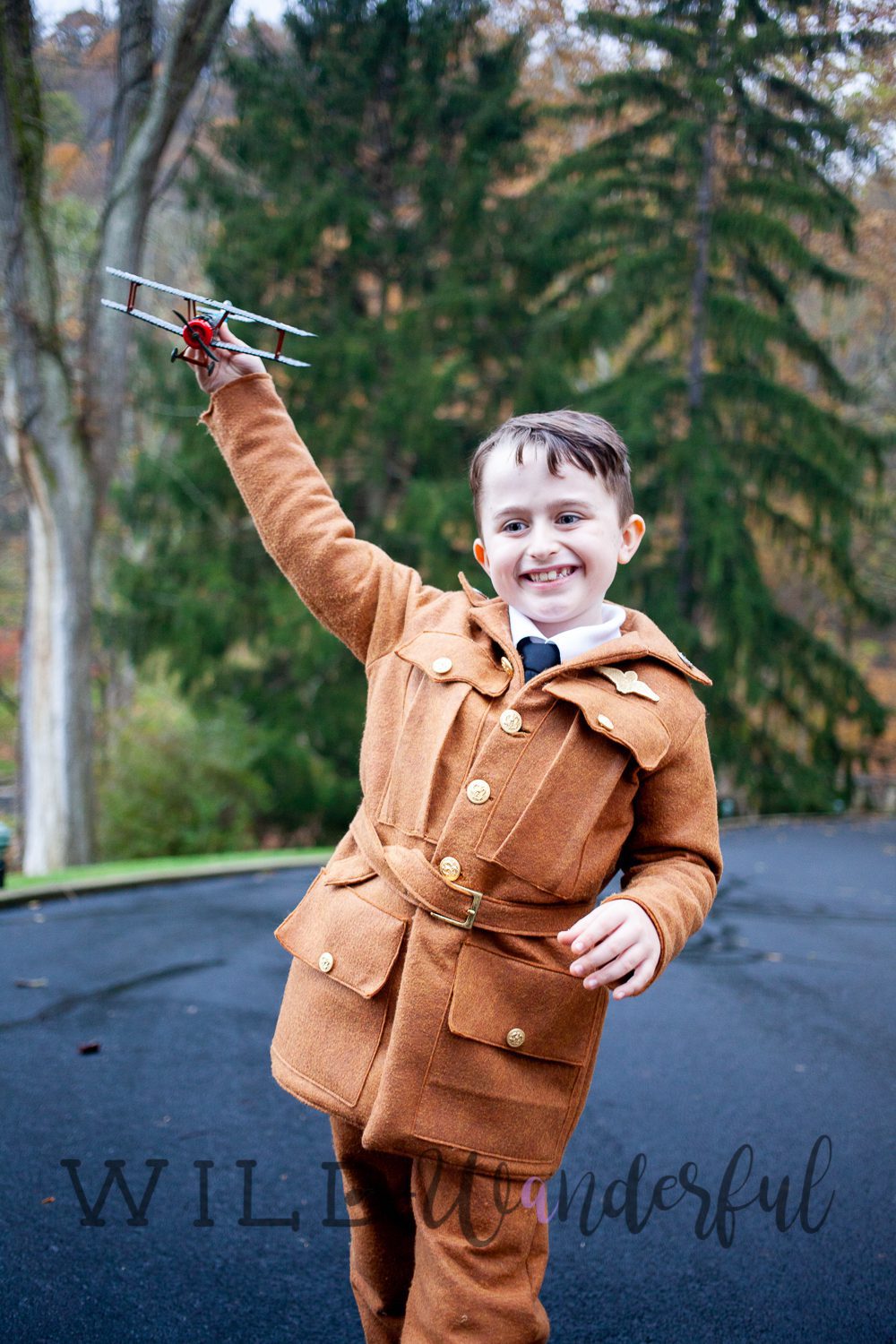 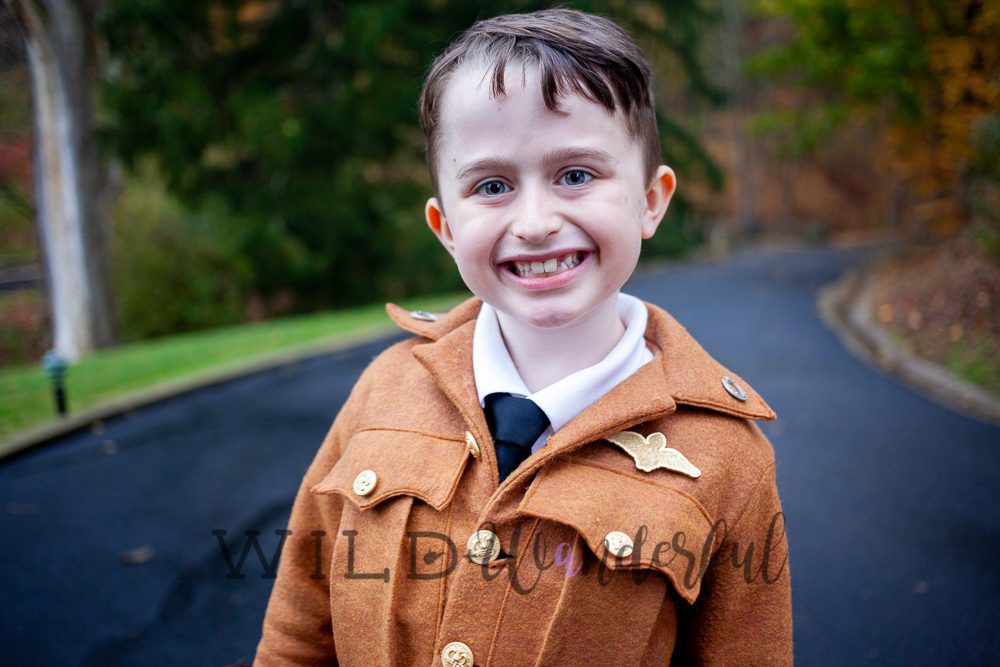 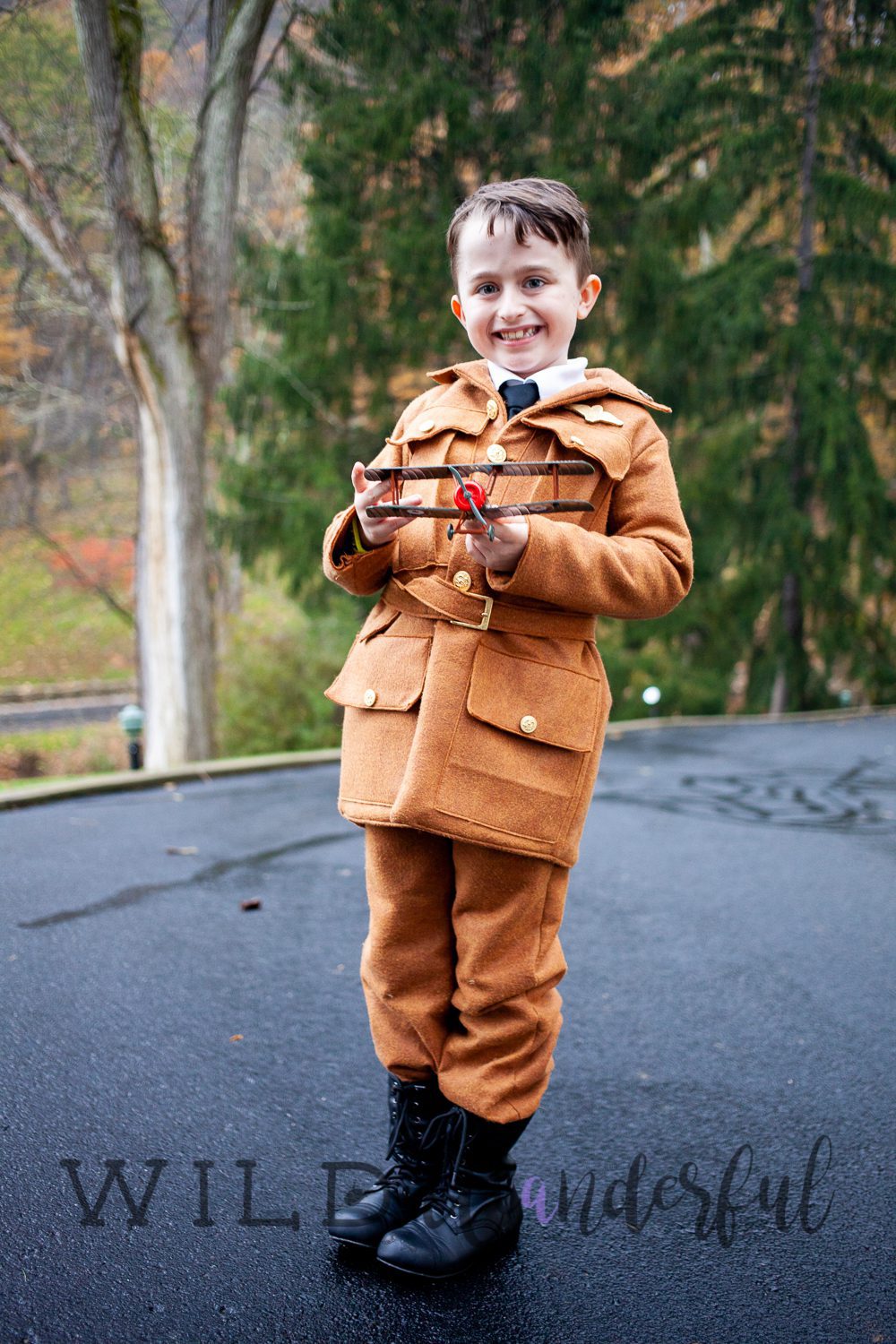 I studied a lot of photos of Louis Bennett Jr and finally decided upon this uniform of his to replicate.  We had a heck of a time finding shoes for our Louis to wear, but I think they worked out in the long run (thanks clearance section of Target!)  I didn’t want to mess with wool but wanted something that looked similar enough, and was happy that the felt from JoAnn Fabrics gave a wool-ish look without breaking my piggy bank….or sewing machine, which currently hates sewing anything thicker than a couple layers of cotton wovens. 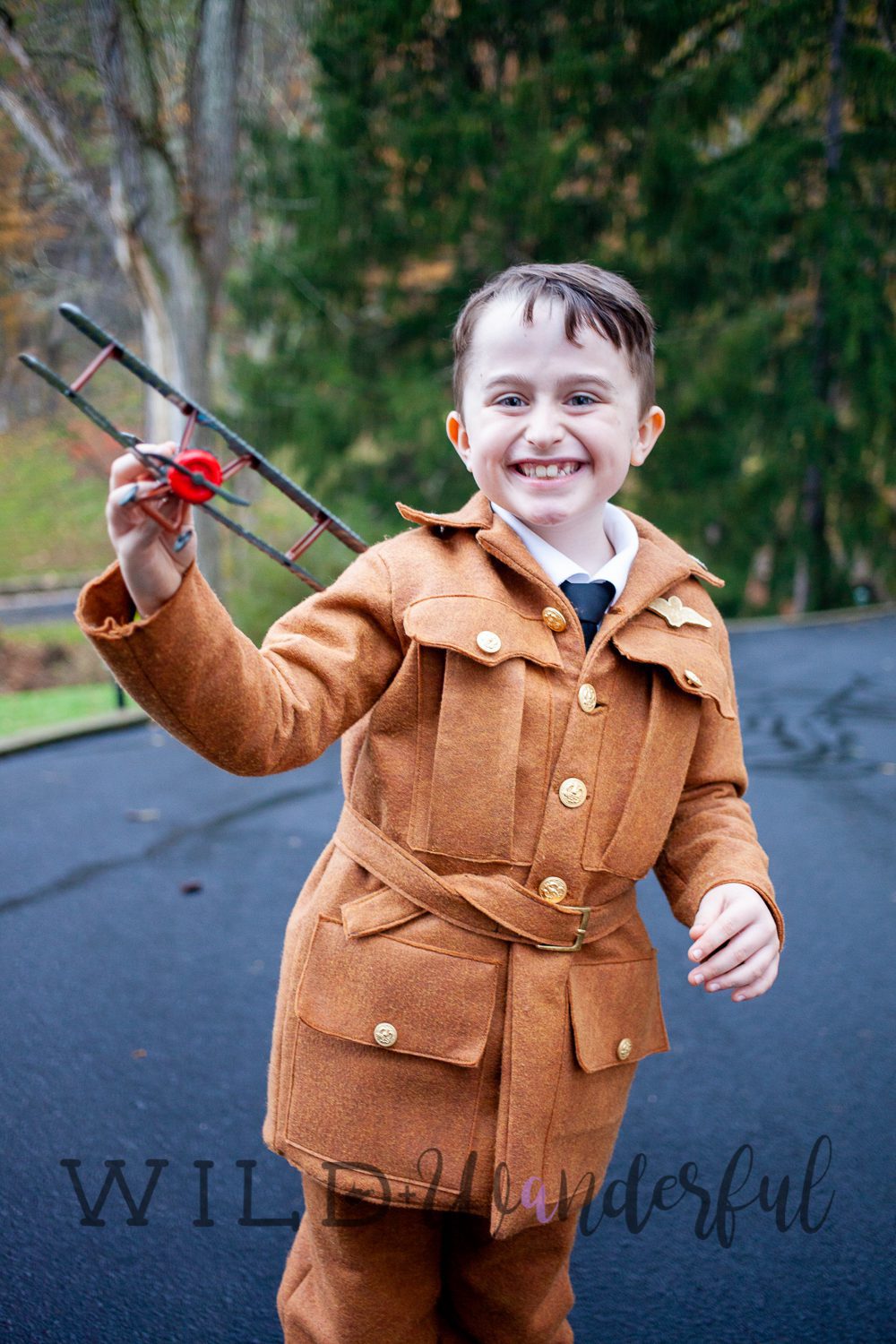 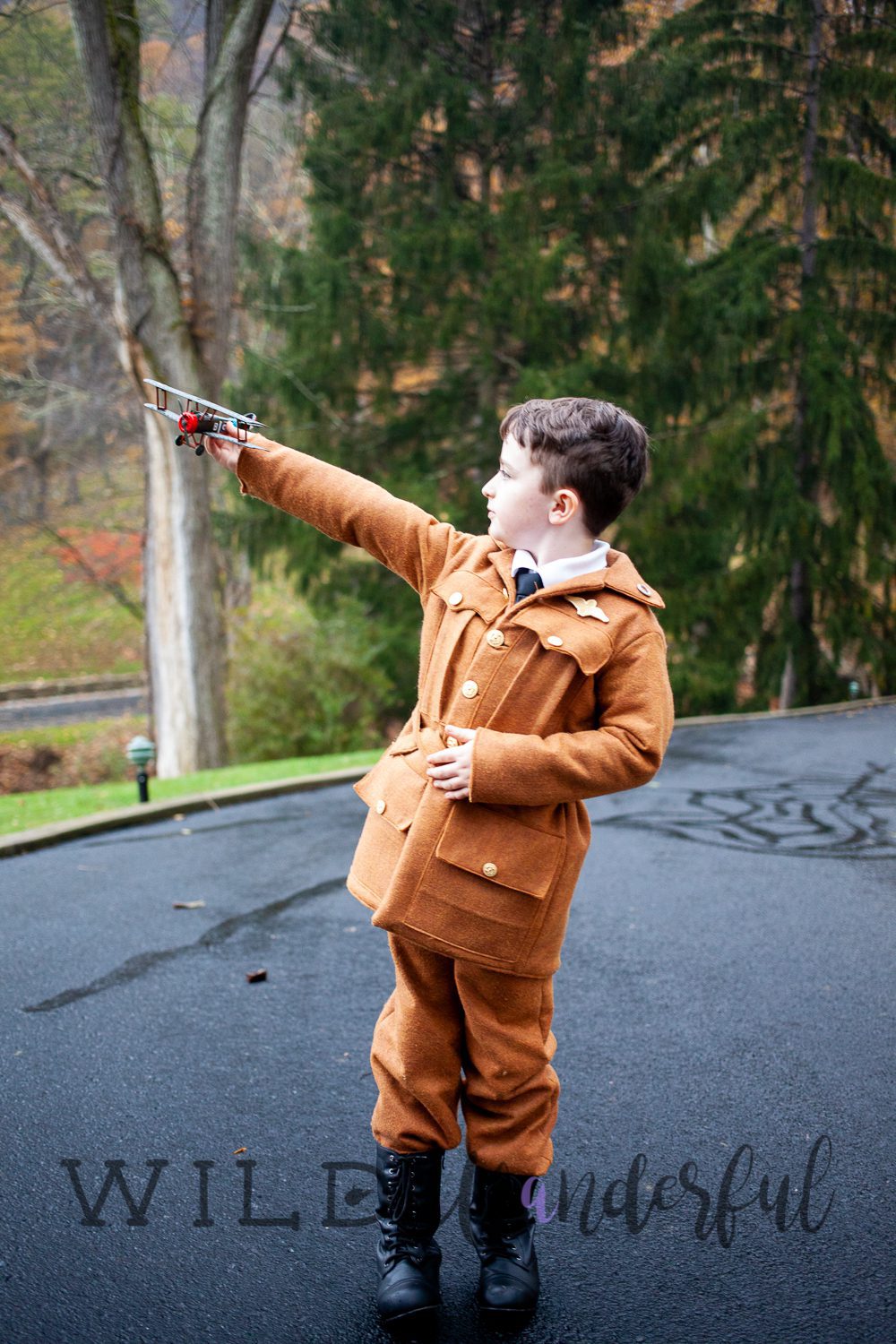 This was such a super special costume for me to be able to create for Louis, and I think it’ll be the first one that we actually hold onto.  It doesn’t go unnoticed how wonderful our little 8-year old is, as I can’t imagine most people his age are too interested in learning about WWI pilots, and their own family history.